It's a Dirty Job


Sheep are filthy, filthy animals. It takes a special kind of person to shear them properly.

A few weeks back, we had a couple of professionals over to take care of the 50 or so sheep at the stables.

For a whole day, they worked and worked, side by side, and at the end of the day, they were done. A huge pile of sheepy fur was being hauled away.

I had had the great idea of asking them to set a side a couple of fleeces for me, so that I could try my hand with wool at the raw stage.

Clearly I had no idea what I was talking about, and my idea of sheep was more or less like the following picures, sweet, soft, little baaaaah baaaaaahs. Right? 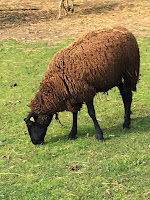 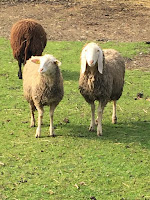 So cute. So soft. Right? RIGHT?!?! Black and grey, funny ears hanging down, or ears standing straight out to the sides. I thought it would be lots of fun getting my OWN wool, from the beginning, "in the grease," as the saying goes.

My dear friends, I now know why it is called that. In the grease.

A sheep fleece is an absolute and complete thing of lurid evil. And what isn't mud, and earth, and hay, and other muck in that fur? It is poop and pee. Add to all this, some massive amounts of lanolin, to tie it all together, and you have the perfect set for Anna's fleece-nightmare, take 1, shattering the romantic dream at the outset.

Yesterday, Sunday, I went about this job just as I do all other things in life: with massive amounts of confidence and all of three minutes of youtubeing for info. Lemme tell ya, three minutes do not prepare you for this. They were not enough to even come close to preparing me for what was coming, as I started with fleece number one.

I opened the sheet the shearers had tied off for me, I thought this was an interesting-looking fleece: perfect and yellow. I was watching the cut side, the side that is closest to the animal itself. Fluffy and yeah, kinda greasy, but I knew that going in. Look, isn't it pretty? 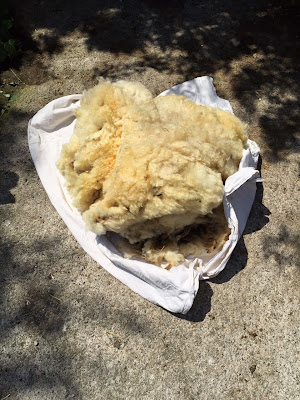 As I turned the thing over, however, to lay it flat, I took a good look at the outside of the fleece. There was a totally different story being told here. A story of many, many lunches in the hay, lying around in the mud, and sleepovers with the girls down by the manure pile. Oh, and droppings that just hung on for dear life. The joys of being a sheep. Take a look: 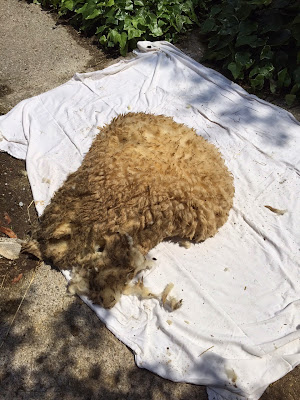 So, I set to, and unfolded the thing, dirty side down, and fluffy side up. Not that it looks a whole lot better on this side, eh? Time for skirting. 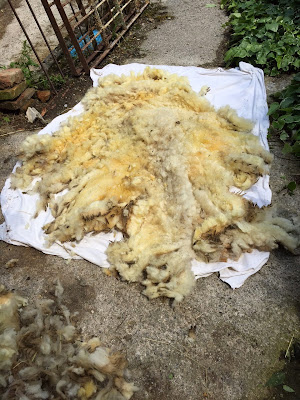 (Skirting means you take off all the side-muck around the whole fleece, as you actually keep only the middle-parts, the wool that used to be on the sheep's neck, back and sides).

I donned my heavy-duty gloves and went to work. 30 minutes later, I was done. With the fleece, with sheep, and with wool in general.

No, just kidding. But it was probably the most disgusting job I've done in a long while, and I'm a cowgirl—manure is no stranger to me. Just sayin'.

Here is a pile of skirted stuff that went straight into the trash. Yes, there's a massive amount of poop in that pile. 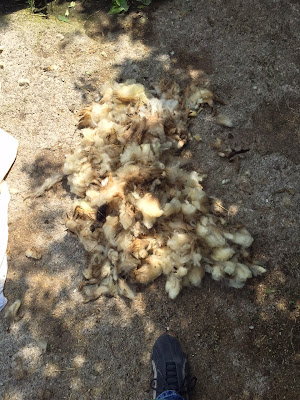 So, I skirted that white fleece. Had a long drink of water in the sun. Chatted with some friends. Then tackled another white fleece. Here an image of the two not-so-extremely-dirty fleeces that I bagged and that are ready for the washing. That's going to be a treat too. I can only imagine how black that water is going to be. 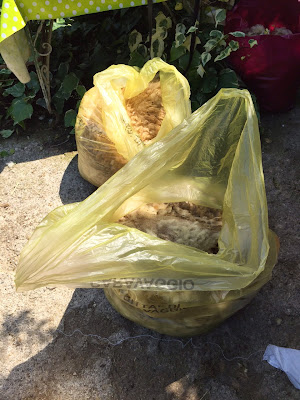 I did a grey-black fleece too, but by then I was so filthy I didn't want to touch my phone to take a picture. I'm sure you don't want to even know how itchy everything was by that time.

Three bags are all stashed away in my garage now, with moth repellant and a whole lot of prayers to the insect gods to overlook my small bundles. They say it is easier to keep the moths out if the raw wool is still in the grease, so I won't wash any of it until I'm planning on using it.

Then a day passes, and somehow the memory of the ordeal softens, and the curiosity gets to me, so I go down to my bags, and get some white and some grey-black fluff. It is still disgusting. It still smells of poop, pee, lanolin, and old sheep. It is so greasy it's almost silly.

And so I hand-wash it, (in mesh bags so it doesn't go all over the place), separated, white from black. I wash, again, and again, until the water is finally clear. Six times for the white, and four times for the black wool.
And it dries in the sun on my terrace. (Here you see the white, but the black was equally clean). 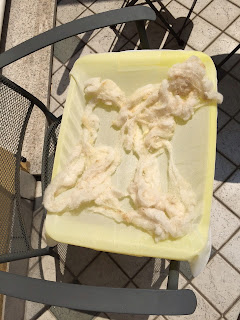 And when I grab my makeshift carders, and start carding, magic happens.

As the white is drying, I card the dark grey with my dog fur brushes (Hey! No dissing these brushes, they are awesome, and REAL carders cost over 150 dollars a piece—I don't have that kinda cash lying around), and I make rolag after rolag of the finest wool you could ever imagine. It shines. 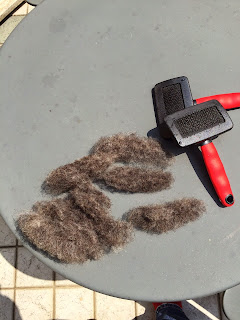 It is beautiful. It is soft in my hands. And I realize that I love it. I just love wool.

—oh, lord, I just realized I have four more fleeces waiting for me at the stables.
Let the wool moths have them, I say.