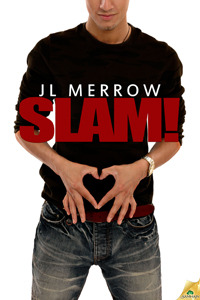 
Jude Biggerstaff is all the way out and loving it - mostly. The Anglo-Japanese university graduate is a carnivore working in a vegan cafe, an amateur poet with only one man in his life. His dog, Bubbles. Then there's "Karate Crumpet", a man who regularly runs past the cafe with a martial arts class. Jude can only yearn from afar, until the object of his affection rescues him from muggers. And he learns that not only does this calm, competent hunk of muscle have a name - David - but that he s gay. Jude should have known the universe wouldn't simply let love fall into place. First, David has only one foot out of the closet. Then there's Jude's mother, who lies about her age to the point Jude could be mistaken for jailbait. With a maze of stories to keep straight, a potential stepfather in the picture, ex-boyfriends who keep spoiling his dates with David, and a friend with a dangerous secret, Jude is beginning to wonder if his and David's lives will ever start to rhyme. Warnings: Contains a tangled web of little white lies, a smorgasbord of cheesy limericks, a violin called Vanessa, some boots that mean business, and the most adorable little dog ever. Poetry, it's not...

Where to begin? Probably with the fact that this story was truly cathartic. It has been a long, long time since I laughed this hard. Every single sentence fucked with at least one not very politically correct theme, often more than one, and every time cracking me up so bad I had to look up from my book and giggling go: “Wow! Well, fuuuuuck!”

That, my friends, is how I know it's a good book for me.

Jude, our MC, is Anglo-Japanese, and it is a big part of him, much like your own belonging somewhere is a part of your identity make-up. Jude owns his British heritage, and is absolutely hilarious about his Japanese one. Of course, most of that heritage consisted of a Japanese father who upped and left his mother when she was expecting Jude, so he is completely lacking in actual knowledge about the Japanese culture.

Jude is a bundle of energy. Had he been American, I believe he would have been put on a strict régime of Adderall, many pills every day, but in Europe we are perhaps a bit less prone to diagnose the spectrum? Or at least, less prone to medicating? He is beautiful, but scatterbrained, and has absolutely no filter at all. He is, as many young men and women, very focused on sex: having it, wanting it, thinking about it. He is a hummingbird on meth, some days, but poetic and full of creative verve. He quite charmed my pants off with his crazy limericks and wild poetry, and I noticed myself falling into writing one or two limericks of my own during the read. (No. I won’t).

This author has a way of writing Jude’s silly side that just has me in stitches. I love him after having read only 10 pages, he is so sweet and crazy and cool and creative and silly. I adore silly. When the gunpowder smoke clears up, there is not one single holy cow left standing. But Ms Merrow then proceeds to reload and take precision aim, shooting straight at most everything, including vegans, carnivores, gay-bashing, child abuse, racism, drug abuse, missing fathers, and problems that single moms may encounter.

Jude’s best friend, Keisha, (who I surmise is black, even though I believe it is never really clearly stated, I just go by the name and the feeling—is that wrong of me?) is a hoot; she is querulous and beautiful and strong and kickass and his friend, his true friend. I love that. She is a friend by his side in ways that most people only dream of. Jude also stands up for her in ways he wouldn’t even stand up for himself. Beautiful. Truly beautiful. Those two, trying out for karate classes had me roaring with laughter.

Jude meets David, who isn’t out of the closet and ten years his senior, and they both fall for each other like over-ripe apples—after a bit of initial problems of course. Jealousy over ex-boyfriends called Knut, for example. Which leads me directly to a passage of great literary worth:

“If he laid a finger on my David, I’d just have to use my newfound martial arts mojo and kick him in the Knuts.”

And then there are some middle-story problems, of course. And then some get-together-hotness, and then a little angst that quickly gets sorted. There, all better now!

I found that race was present in this story, in a good way, i.e. people WERE of different races. It makes my heart sing, as most books are just white people, with white problems, and white neighborhoods, in white countries.

I grew up on three continents, and for over 75 percent of my life I have been a foreigner, never fitting in, always looking like I should be somewhere else. Somewhere in the middle of this book there is a bitter-sweet banter where you can just feel how Jude had been bullied as a kid. Here’s the passage, I found it dealt beautifully with how mean kids can be to their peers of different origins:

“It’s getting a bit nippy now the sun’s gone in,” said David.
I glared at him. “Not particularly fond of that word. Not after kids at school using it to get a cheap laugh at my expense—It’s a bit nippy in here, innit? Yeah, Jappo Jude just walked in.”
“Jude…” David’s face crumpled. “I would never, ever say anything like that, okay? I’m sorry I brought back bad memories for you. I’ll try and be more careful in the future.”

And that, my friends, is how you handle a delicate matter of someone having been made to feel bad about belonging to a specific race. Also, I command Jude on his externalizing his discomfort at once, instead of just taking it in silence. I found relief here, there was dignity and good feeling.

And suddenly, now at the end of my review, I realize that this story, that had me laughing until I cried like a maniac, has made a deeper impression than I expected, for all its layered messages. And when I go read what other people have thought about this book (as I always do AFTER I’ve written down my own feelings for a book) I see that this is an extremely divisive story. You either love it or you hate it. How about that. Many people don’t seem to see AT ALL what I am seeing.

This is why I love books. They are personal.

I see things of great value in here. Your mileage may vary, but for me, this was well worth both my time and my money. I feel I am thinking more about this book than many other ones that I have read lately.

JL Merrow really has a way to making her stories insinuate themselves into my head, and this one will stay with me for a long time—a bit like her Muscling Through, but on a different level.

Yes, I absolutely adored it. Crazy limericks and all. Kick-ass hippie, veteran vegans and all. Carrots and burgers and all.

Yeah, I loved Jude, his world, its poetry, and all.

Nobody forced me to read this book, I simply fell upon it and devoured it in three days. I’d really like it if somebody fed me more of this kind of crack.

Find this book at Samhain Publishing