Book Review - Tell Me It's Real, by TJ Klune 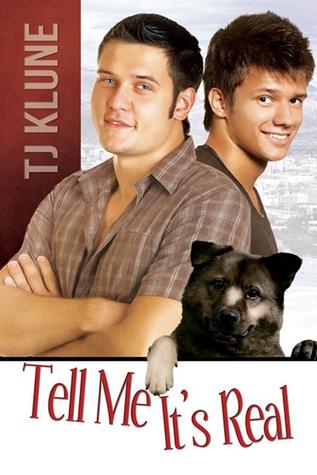 Do you believe in love at first sight? Paul Auster doesn't. Paul doesn't believe in much at all. He’s thirty, slightly overweight, and his best features are his acerbic wit and the color commentary he provides as life passes him by. His closest friends are a two-legged dog named Wheels and a quasibipolar drag queen named Helena Handbasket. He works a dead-end job in a soul-sucking cubicle, and if his grandmother's homophobic parrot insults him one more time, Paul is going to wring its stupid neck. Enter Vince Taylor. Vince is everything Paul isn’t: sexy, confident, and dumber than the proverbial box of rocks. And for some reason, Vince pursues Paul relentlessly. Vince must be messing with him, because there is no way Vince could want someone like Paul. But when Paul hits Vince with his car—in a completely unintentional if-he-died-it'd-only-be-manslaughter kind of way—he's forced to see Vince in a whole new light. The only thing stopping Paul from believing in Vince is himself—and that is one obstacle Paul can’t quite seem to overcome. But when tragedy strikes Vince's family, Paul must put aside any notions he has about himself and stand next to the man who thinks he's perfect the way he is.

This was a ride and a half.
This was a crackfic on meth, smoking pot, while chewing coca leaves. So THERE went the spelling, right out the window. And look, THERE went the politically correct, straight out the other window, without even opening it first. (The crash you just heard was the glass shattering, and falling to the ground several stories down, on all kinds of people who are not gay). And booom THERE went half of your fans, the female ones who can't handle that many gay men have issues with vaginas. LOL. (Yeah, there could have been a few less jokes and less dumping shit on the vagina, but hey, it takes a true connoisseur to appreciate the art of the female fancy parts). (No, knowing Helena Handbasket is not enough). And KABOOOM there went a bunch of people who don't like slurs of any kind.

I don't mind, when it's done this way. I love it when everything gets put upside down and inside out, because THAT is where you notice it. Suddenly it's RIGHT IN YOUR FACE. So you notice.

About bloody time, if you ask me. (But I still love my vag, so stop cussing it, will ya?)

This book was pure crazy. It could most certainly have taken three more tours through the editing process, as both verbs and words were in the wrong tense and just plain wrong. Prepositions up the creek without a paddle. And usually that grates on my soul. Usually, I hate it.

BUT HEY! I just laughed my ass off, I laughed and laughed, and then I laughed some more. In two separate instances I even woke up Mr Lund from my guffaws.

So, even if the language wasn't up to Mr Klune's usual standards, I feel this book was written in one looooong sitting, maybe while he was writing some really deep and hurtful stuff in another book? (Into this River I Drown, comes to mind—that must have been a dark and heavy book to write, and this one would have cheered him up a lot).

What saves the day here is how it all gets so fucking out of hand it borders on the comically tragic. Or the tragically comic. There is one instance where a serious discussion about in how many ways Paul could possibly destroy their relationship, and ends up, after mere minutes, to be all about the superhero costume that Sandy should be wearing. Something just goes SPACE-BOINK-OIK in my head.

Crazy book is crazy. Now you will either love this book or you will hate it. There simply is no in-between.

You all know where I stand. I am firmly in the corner with the two-legged, squeaky-wheels dog named Wheels and the homophobic, slurring parrot named Johnny Depp. We are having a ball over here.

So, Mr Klune, please. Continue. We are all ears, over here. Feed us more words.
Pretty please.

I was NOT asked to read this book by anyone, I paid for it with my own money.

Find this book at: Dreamspinner Press