ARC Book Review - The General and the Elephant Clock of Al-Jazari, by Sarah Black 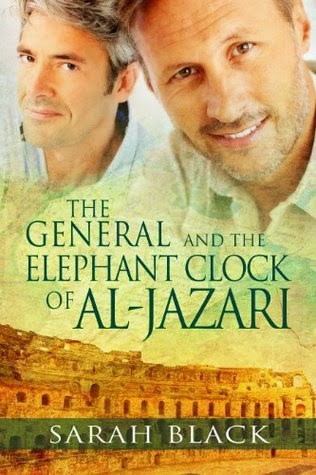 Fresh out of the closet, General John Mitchel and Gabriel Sanchez are settling into their new life together when an old army colleague taps them for a rescue mission to Tunisia. Eli and Daniel, two former Rangers working security, have been arrested in Carthage, charged with blasphemy and thrown into prison. With rampant unrest in the ancient city and an old enemy targeting them, John gathers a team to liberate the two captive men. When he discovers Eli’s boyhood obsession with Al-Jazari’s Elephant Clock, the rescue becomes complicated and strangely beautiful, and John and Gabriel have to risk what they love the most to bring their team home.

What strikes me with this story is that this is a regular thriller/army story, which also happens to have some MCs who are gay. It is not an m/m romance book, as such. And although there is very much love in it, there is almost no sex at all, and I’m not even missing it. (You never thought you'd see me write that, did you?)

And Kim, FTMFW, every time. I adore that boy. I ADORE HIM.

Not only is this a book about kick-ass army men (who also happen to be gay men), even the women in this story are portrayed both with respect and intelligence—they are both multi-faceted and three-dimensional.

I especially appreciated Ms Madeline Grant from the US Embassy in Tunis, the description of her going into negotiation mode as a stone-faced rock amazed me. What a woman! Brilliant.

Also Jen was great, a young and fearless woman with ideals and spunk. I love to see this in stories, together with the multicultural backdrops and people. Women’s groups spreading news across Northern Africa? Fucking brilliant. The use of social media? Another brilliant move.

In this story you will find a lot of political views on world events, including religion and terrorism. Ms Black is well-informed and well-researched, it really impresses me a lot.

“Too many young men with nothing to do, no jobs, no future, and trouble was likely to follow.”

So few books manage to span diversity like this. There are at least three religions involved, there are Arabs from many different countries, a Korean, some Hispanics, a bunch of Caucasians, a Native American, and everyone is judged or appreciated on personal merit (or demerit, as it were) only. Absolutely refreshing.

I adored the references to the fantastic Spartacus Blood & Sand and Andy Whitfield—what better setting than Carthage? It made my heart sing.

And then, this is also a hilariously funny book, with some true humor shining bright. I found myself screaming with laughter at several passages of brilliant insight and tom-foolery. Like:

“You’re the only kick-ass general I know who needs three gay boys to dress him, John.”

Do you also love beautiful language? It is here. Poetic, even, look:

“Winslow was a little town on the border with Navajo and Hopi land, an aging railroad town the color of dust.”
Can’t you smell the color of that dusty town?

“I knew that boy when he was a baby pilot, still wet behind the rotors.”

Half a star gets taken away because of the so completely, extremely and terribly fugly cover. I wish Ms Black could get a new artist, because her books are truly worthy of serious cover art. Already the last book in the series had a cover that made my cry in pain. This one is only slightly better, but on a scale from horrible to bad.

An upside in this book is that Martha is now portrayed as a more balanced woman. Last time I was so angry because by god she had reasons to blow a fuse, and was shown off as a shrieking shrew. This time, she has both depth and three dimensions. Thank you.

All in all an absolutely fantastic read. Do not let the title fool you (yes, I know how you read that), nor the cover: This is a good, good book.

It leaves you happy. That's what good stories do to you. They take you, they shake you, and then they leave you a little bit better for having read them.

I was given an ARC of this book for free from the publisher, Dreamspinner Press.
A positive review was neither expected nor promised in return.